Loafer in the kitchen

Gettin' our groove back

Bit by bit Christchurch is nudging things back to 'normal' and getting it's groove back on. Out of town bands are (finally) seeing the city as a viable place to tour and the drought is coming to an end. This is due to the fact that new venues have been opening up over the last few months. Whether it's through foresight, luck or just people taking a punt, I couldn't be happier that those involved are just getting on with it and making it happen.

The Brewery is currently the best venue on offer for music lovers, but I'm looking forward to seeing what The Archive and also the new Dux venue will bring to the mix.

The Arts Festival has got some fantastic bands coming and at only $20 max I'll be taking in whatever shows I can.

Nix Pix
There's not a great deal on this week, some stuff, but only a couple of gigs really worth a mention in my opinion...


Friday 19 August
The Nudge @ The Brewery

Good Vibrations is over. Hurrah! 5 gigs from April 29th to 6 August that have fulfilled the need for indie music lovers to have somewhere to go and something to do in post-quake Christchurch. (Well, I'm pretty sure they have.) They have certainly fulfilled my need for music over this time, and selfishly, I think that's what drove me to do something like this.

I'm the one with the stupid smug smile on my face at every gig, and for good reason. I don't get out of the house much, so it's been real handy setting up one night a month to listen to my favourite local bands, and also those bands I'd heard were good, but hadn't had a chance to see. I've become an even bigger fan of Chch music. We're lucky to have such a depth of talented bands across lots of genres. Freakin awesome actually.

Anyways, it's been a blast. New venues are under way thereby ending our temporary role in the Christchurch music scene.

The above video is a few snippets of some of the bands at Good Vibrations #3. Keep your expectations LOW in regards to the quality of the video. I've synced it pretty badly here with some pretty basic software.  Eergh. Cest la vie. Buy me a camera. The sound is great thoough and is courtesy of Nick (?) who recorded the entire event for Doctors who were generous enough to give me a copy. Cheers guys!

I'm still bloody exhausted so have no words just pics. They tell the story well enough. Sorry no pics of Nadia tho cos I was on the door. 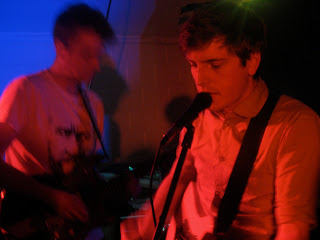 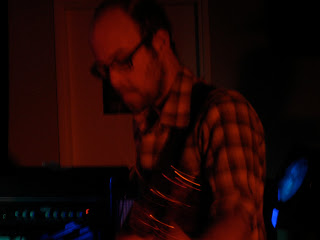 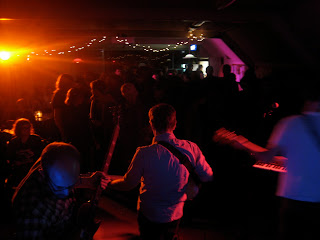 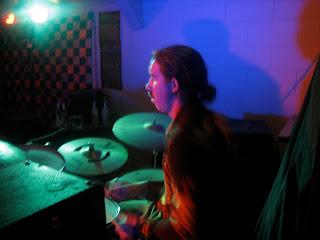 AND finally the act that got everyone under 25 in Christchurch battling it out for who had the wittiest blog comment.... 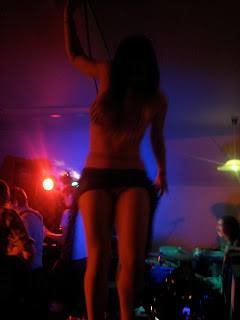 Posted by Flaming Red at 2:34 PM No comments:

We had a couple of improvements we needed to make from Good Vibrations #1 - the biggest of which was to increase our street presence so people could find us. Thanks to some masterful antics with lights, cardboard, laundry racks and glue guns,  Nick White and Chester Dextar got this job DONE! 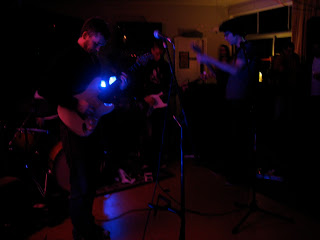 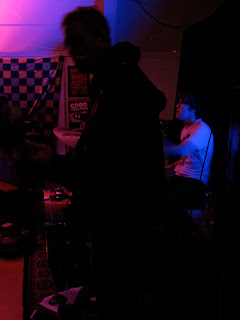 Posted by Flaming Red at 8:54 PM No comments:

The earth moved and it was GOOOOOOD!

Here's some pics from Good Vibratons #1. The pics are crap but the gig was a knockout success. We were able to donate $200 to the Wunderbar which will go towards their reopening, but more importantly we created a night of good music, good food, some big big love and some mighty good vibrations. Mission accomplished.

Posted by Flaming Red at 8:39 PM No comments:

I've had quite an uplifting week, and this is due, in part, to seeing some key areas of Christchurch gather the momentum to move forward. I talked earlier in the week about the serious lack of venues in the city - and particularly in the CBD. It has been incredibly sad to hear that some of my favourite venues - all huge supporters of local music - will never reopen their doors.

It's a sad farewell to Goodbye Blue Monday who in it's relatively short life had become one of the best venues in town. The iconic Dux-de-lux will be out of action for some time, possibly years. Jeez I hope not though. There is a call for the Arts Centre to restore the Dux, and I hope they have some success here. Al's Bar is also going to be closed for some time - although word is that their buildng is ok, it's the neighbouring buildings that pose a threat. Either way it's yet another live music venue that's not around.

Where does that leave musos and music fans? In a bit of a quandry really, but solutions are coming to fill the silence. The Loons has opened its doors and The Wunderbar is getting builders in today so they should be opening soon - all of which is great news for Lyttelton folk.  Sadly El Santo is in worse shape and it might take a while for that to get on it's feet again. Um... Sorry digressing a bit there. There is also a raft of events that are thinking outside the square (excuse the pun)  and getting creative in where and what they can offer. Gap Filler is back with a fair in Church Square, there 's The Great Sumner picnic, family fairs on beaches - all sorts of things. The CHART website is always a great place to see what's happening around the place.

And for all my talk earlier this week - well, where there's a will there's a way, and 'will' has never been something I've been short of. I've set up a couple of gigs a called Good Vibrations. I'm hiring the Canterbury Bowling Club to host a couple of nights of indie music right in the heart of the city. The response from bands wanting to play has been fantastic so I can now confirm Saturday 9 April will be 'Good Vibrations #1'. Several bands have confirmed but I'll wait until everyone has signed off before I post the event with bands. (The video is a big hint.) Rest assured it's a tasty line up that will relieve the silent void we've had of late.